Get fresh music recommendations delivered to your inbox every Friday.

Until Lions Have Their Historians, Tales Of The Hunt Shall Always Glorify The Hunter 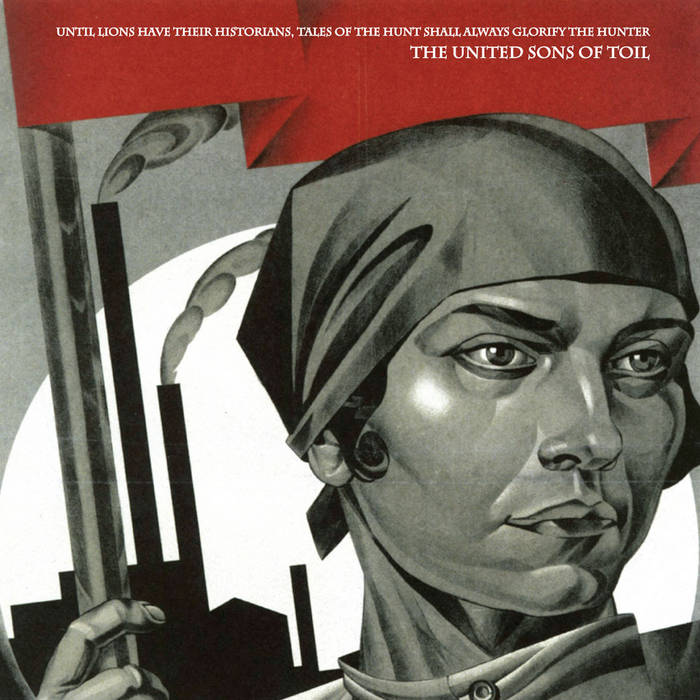 lust4metal Above average post punk with modern hardcore leanings. Downloaded tracks cannot be played on an iPod due to invalid file names (probably due to title length) Favorite track: Invention vs. Innovation.

Within less than a year, the Sons released their second full-length on May 24, 2008. Until Lions Have Their Historians, Tales of the Hunt Shall Always Glorify the Hunter is even more unrelenting than Hope with faster, more ferocious, songs and vitriolic diatribes about the exploitation of indigenous peoples. Lions billows in scope with wiry post-punk screes giving way to more expansive compositions, eventually culminating in epic layered guitarscapes.

'Explosive, violent and for the most part terrifically precise, "The Treaty of New Echota" is definitely a feather in the collective cap of The United Sons of Toil. Make that their faded, grease-and-sweat-smeared work cap.

The lead song on the band's new album Until Lions Have Their Historians, Tales of the Hunt Shall Always Glorify the Hunter from Sector Five Records, this tough, neo-noise rock harks back to a superannuated Rust Belt world of drop forges and blast furnaces with ever angry, chopping chord and sharp, pile-driving beat. Singer/guitarist Russell E. Hall's fascination with the cerebral aggression of old-school noise stars like Big Black and Tar is obvious, but there's also more than a hint of breathless '80s hardcore here, too, which makes "Echota" far less antiseptic than most math-rock.

Strong feelings have a place in Hall and company's brainy esthetic, and the outrage he expresses here over the controversial treaty that ceded all Cherokee lands east of the Mississippi to the United States has a feral intensity about it. As of course it should. Looking for a musical analog of your favorite Howard Zinn tome?' -- Isthmus

"The 'Sons sound like a more aggressive Unwound, giving a sort of mathy post-punk vibe with some hints of chaos thanks to a seemingly heavy influence from the Touch and Go noise-rock movement. Guitarist Russell Hall wields distortion like Neil Young gone post-hardcore, his grating riffs appropriately complemented by the thunderous work of bassist Bill Borowski." -- Scene Point Blank